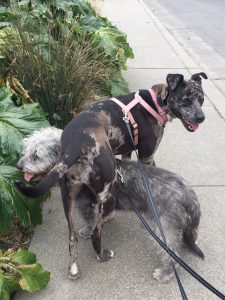 “We had been looking for a dog to complete our home for quite some time. It was originally only going to be one dog. We wanted to make sure they’d be a good fit for us. I had been interested in Link and Navi for awhile but it was convincing my boyfriend that two dogs were the right choice.

One day after work he had come home and asked me about the pair. I explained that two would be great because they’d love on each other and keep each other company. It was then he told me he went to Butte Humane to meet them and said they were the sweetest and coolest dogs he’d met so far.

The next day I went and adopted Link and Navi.

When we first brought them to the house, they immediately made themselves at home on our couch. We felt like they had been waiting for us and that we had them all along. Link has been such a joy to have. He is always by our side and loves to play chase. Navi has been such a love bug and enjoys cuddling. Her favorite thing is still to play catch and run around. Both are so loyal to us and we feel so lucky to have them in our lives. They also love each other and there was no separating these two, we’re so glad we didn’t.

These two have been to the beach, in the snow, camping, hiking and on roadtrips all over the place. We love bringing them with us everywhere we go and giving them the best life we can.

We couldn’t be happier with our choice to give them a forever home, our house is complete now and full of love.” 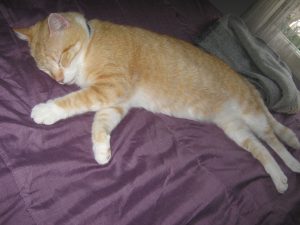 Greg here. It is hard to believe, but our one year anniversary is upon us on April 1st. Thank you for your hospitality. I’m glad you found me my folks – they are good, they are as golden as my fur. I like it here and I am all settled in.

We recently got a new member to the family, her name is Miranda and she is full of energy. She likes to act tough around me, but I know she is really a softy so I just ignore her antics and she is coming around. I think that by the end of the year, we will be snuggle buddies.

I hope your good works are continuing well. Thank you for helping me find this home. 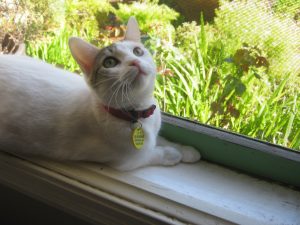 My new Mom and Dad are simply the best. Dad has a beard, which I find very interesting. I love to crawl in it and pat it. He is the best.

Oh, we have another cat here, his name is Greg. I have to tolerate him, he ignores me, but I feel like I have to growl at him at least a little. But, he is not really all bad, I just want Dad all to myself – oh but that would mean no Mom. I guess I just really like being the center of attention. Dad tells me stories and both Mom and Dad play lots of different games with me. they say I’m a natural mouser. I like to hear that.

Thank you for your hospitality earlier, I’m doing even better these days. 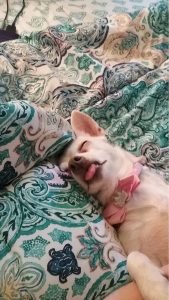 Written by Kimberly I. & Wendy B., loving adopters

Luna was a very shy dog when we first brought her home, but she quickly established herself as a member of our family! She likes to roll on her back for belly rubs or to be cradled in your arms, she’s very much a cuddler! Sometimes when she falls asleep or if she’s relaxed, her tongue sticks out and it’s a very funny sight. We’ve gotten some toys for her, but she seems to prefer the squeaky stuffed toys the best. Luna’s favorite dog to play with is Buffy, our other girl chihuahua. They jump and roll around and sometimes run around the house! She is a very laid back dog, but she often gets very excited when we go on walks. We’ve taken her on walks around t 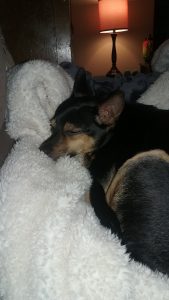 he neighborhood and at the local dog park, and she is very good with her leash and harness.

Gatsby is a very loving dog. He loves to lay in everyone’s lap and cuddle or be held in people’s arms. He has a stuffed hedgehog toy that he loves and sometimes he falls asleep with it. He’ll sit with it on the floor, couch, or bed and continuously squeak it too. Gatsby’s favorite thing to do is go for walks. He gets excited when we go for a walk around the neighborhood or at the dog park and he’s very vocal about it. He is very good with his leash and harness. He wasn’t so sure about our cats at first, we think that he hadn’t seen one before, but now he plays with them when they want to play (and sometimes when they do want to play!). He is a very friendly dog, even to new people.

Luna and Gatsby are very much a part of our family and we thank you for allowing us to bring them into our lives! 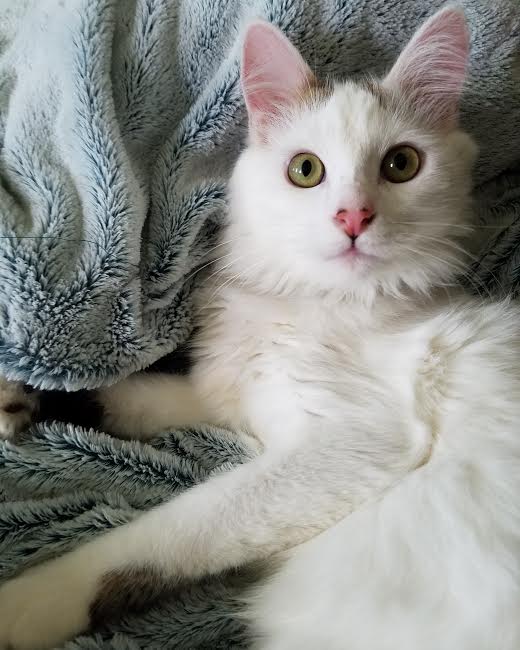 “I actually started working with BHS in August. I wasn’t really looking for another kitty but it is hard not to fall in love with some of them! Not too long after I started, Mr. Puff showed up with a litter of kitties. He was shy and scared of the new environment. I loved seeing him and watching him grow. He was there so much longer than I expected him to be! But obviously he was meant to join my family. He went to free roam and we instantly bonded. I knew it was time for me to take him home! Thank you BHS!”

We are so glad that Mr. Puff has found a happy home! 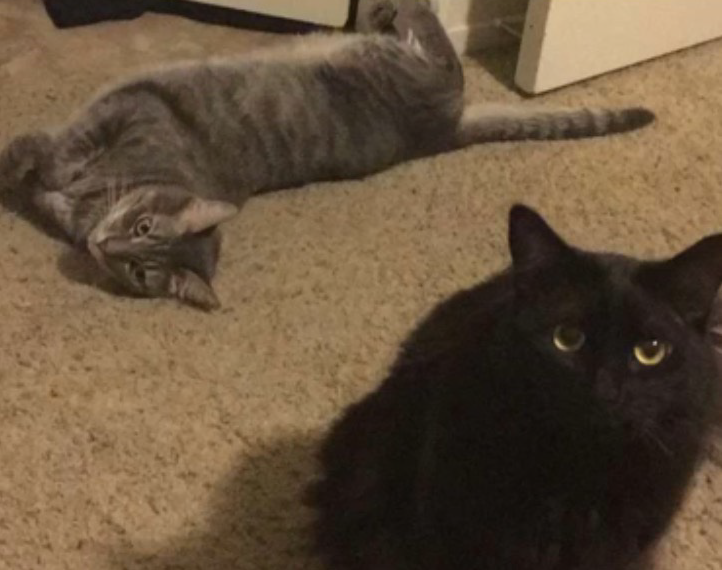 Written by Racheal B., loving adopter

“My boyfriend and I have adopted two cats from Butte Humane Society, and our little family is a definite success to us!

When we adopted our first cat Sherlock, a one-year-old male tabby (he was already named Sherlock and we loved it), he had just been returned to BHS because he wasn’t cuddly. We adopted him knowing that he wasn’t lap cat material, and we have respected that. But since coming to live with us, he has been sleeping at our feet at night, rubbing his face on us, and walking us to his food bowl each morning. He is a tough guy, but he’s a marshmallow in secret, and he loves showing off to company and playing in the bath!

A year after adopting Sherlock, we got him a friend, Watson, who was part of a litter of black kittens at BHS. Watson is the opposite of Sherlock in that he loves to snuggle and be carried around and vocalize his feelings. We also share a mutual love of bacon!

In the two years they’ve been together, Sherlock and Watson have basically turned out just like their literary counterparts, and we all couldn’t be happier. BHS really facilitated our little fur family, and for that we are grateful!”

We are so glad that Sherlock and Watson found their homes, and thankful for the love their new owners have shown!